This is part one of an 3 part mini review of the Eken M001 tablet, from a tinkerer's perspective.

It's a sub-$100 tablet computer running Android, with a 7 inch touchscreen and 2Gb of onboard storage.

There are a few other cheap models with the same chipset, like the M003 (bigger 8" screen) and a netbook form factor model.

You get what you pay for.

If you want an iPad, but don't want to spend the cash. Don't buy this. It's not in the same league as devices like the iPad

If you want a "tablet device", just not an iPad because you're ideologically or tribally opposed to Apple, or you're sure you need something that the iPad doesn't do. Don't buy this either. You'll be underwhelmed, and eventually it'll end up gathering dust on a shelf while you look to the next big iPad killer.

If you want a digital photo frame, a clumsy furless chumby, a mediocre tethered video player, or an ebook reader that works in the dark for limited periods. This might prove OK for your needs. 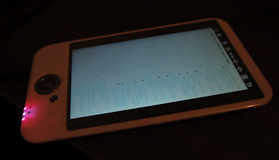 Price. $99 including shipping anywhere in the world. 'Nuff said.

LCD. It's actually pretty good for a cheap LCD display, especially if you're in low light.

Performance. Pretty good in general, UI is responsive and snappy. Better than an iPhone 2G, similar to a 3GS. Some performance tasks (like video playback, depending on codec & resolution) are a bit limited by the CPU, though.

Community. A small community is forming around the M001. They have already come up with some software improvements. Unfortunately, they are limited by poor vendor support (see below.)

Touchscreen. It's resistive, so it's never going to be much good for finger presses. My unit has major problems with mis-touches (wrong buttons being pressed) and identifying the difference between a tap and a swipe. Using a stylus didn't really help, either. I think this might be solvable in software though, with better debouncing in the touchscreen driver.

Build quality. It isn't going to fall apart immediately, but it's not built to last. In particular, things like the LEDs are just cheap and nasty - one of the 3 indicator LEDs is enough to light up all 3 recesses, and the area around it.

In indoor lighting, it makes the LEDs really hard to read (only one is on in this shot!): 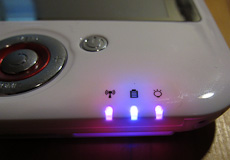 In darkness, the whole thing glows:

Fake chrome around the LCD. What were they thinking? Looks good in promo shots, means you have a reflection of your face any time you use the device in bright light. Really bad usability choice.

Battery Life. Seems like 2-3 hours is the norm, and the battery runs down at almost the same rate when the device is idle compared to when it is in use. Probably a driver problem, but whether it can/will be fixed is up in the air.

Accelerometer. Way too sensitive, the tablet flips orientation at any chance - including just when laid down on a table. Another driver sensitivity issue, I'm guessing.

Android 1.6. Lack of 3D acceleration, and only 128Mb of RAM, give the general opinion that Android 1.6 will be the last version that runs well on this device. That said, noone has actually run 2.x on it yet.

Bad vendor support. Eken haven't released any of the GPL sources that they're required to release. Not only is this in violation of the license, it prevents community members from working together to improve the software and the device performance. If I had to pick one thing that limits the potential for the M001, this would be it.

I think in this market a vendor who really nurtured open source development, and swiftly incorporated improvements back into the official software updates, would find a real competitive advantage - the product would still be cheap, but the software and driver layers would be less buggy and restrictive.

I didn't buy this as a tablet (I bought it for a robot platform), so maybe I'm not the best person to review it as a tablet. However, I can't see myself ever reaching for the M001 to perform anything but the simplest of tasks - watching a video I'd already loaded on it, for example.

My prediction is that in 3 months, pending some amazing community software developments, many of the models sold to date will be gathering dust in a corner.