I'm a bit late to the party on this one. I've read all of the big ranty iPhone and iPad arguments. I've worried a little about the monoculture that the iPhone represents. I decided these were mostly ivory tower arguments. Meaningful for geeks and technorati, but not for anyone much else.

I changed my mind this weekend. 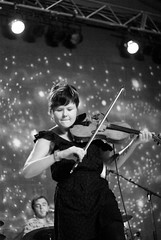 As far as I can see, it's about as far from Silicon Valley as you can get without winding up in Deliverance.

This year, National Folk Festival has an iPhone app.

History of the NFF Programme

This is a pretty momentous innovation.

Don't get me wrong, it really is an innovation. At a festival where a dozen performers are playing at any given time, finding out what's on is hard. Being able to see it quickly and easily on your mobile phone is extremely useful.

I'm worried because, as in all things, it's an iPhone App. If you were a Mac or Linux user around 1999, you were probably familiar with web sites that required "Windows 95 & Internet Explorer 5 or Better". They didn't work on your computer, or they only half worked.

We now have the same situation, ironically rearranged. If you have any other mobile phone, you are a second class online citizen. Everywhere, up to and including folk festivals.

Yes, you can probably read the PDFs on the web site. No, that's not going to be very good. The iPhone app, on the other hand, is great. 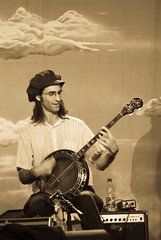 Is there an alternative approach? Maybe. The NFF site is powered by WordPress. "Mobile site" plugins exist that could format the programme for various mobile browsing devices. With some CSS wizards at the helm, I'm sure it could be quite nice.

Would that experience be as good as the iPhone app? I doubt it. The iPhone app that Bonobo Labs have made is really slick. On the iPhone, I think it could be recreated as a web site for Mobile Safari. However, I don't think it could reach that standard for every single mobile device. The standards and the frameworks aren't really there, and the browsers aren't all up to it.

Making something that at least works on other phones is, however, very possible. 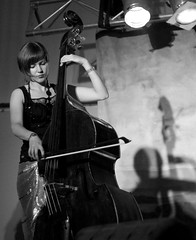 So what's the point to this rant, then? Nothing really, except that I think it's worth worrying about. In 2000 I was proud that I wasn't stuck with Internet Explorer 5 "or better". The alternatives were innovative and they helped dig the web out of a monoculture of ActiveX controls and bad proprietary HTML.

In 2010 I have an iPhone. I'm guilty about liking this monoculture so much. How are competitors going to innovate, short of providing a phone with a full Apple App Store compatibility layer? Is this really today's IE 5?

Thoughts on “Apple takes all”