This Huami H3 smartphone cost me $34US (210RMB) in January. It's sold with a 5 inch screen, Bluetooth, WiFi, 4G cell connectivity, Android 4.4 and an 8 core processor. 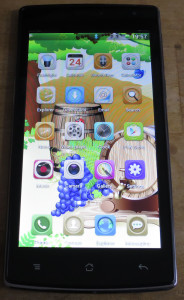 I picked it up in the electronics capital of the world - Shenzhen, China. My hotel was a few doors down from the Mingtong Digital Communications Market, aka "the dodgy cell phone market".

In Mingtong you can buy a huge array of smartphones, feature phones, smart watches, and accessories. Some are fakes of mainstream brands, and some have their own brands. This is where the $12US cell phones used in Project Fernvale were sourced. 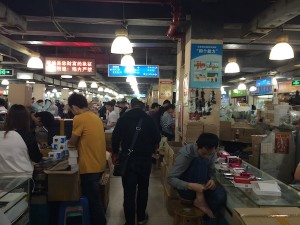 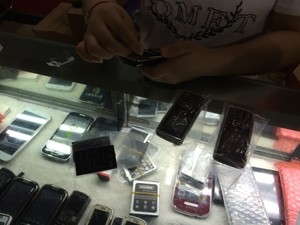 [(Candid pics of Mingtong market courtesy of the Hacdc wiki.)]{.small}

So what's the deal with this Huami phone? Can you really buy a decent smartphone for $34US?

What's in a name?

The "Huami" logo even mashes together the typography of the Huawei and Xiaomi logos:

It's easy to condemn opportunistic copy-pasting of Huawei and Xiaomi's logos. Certainly a Western trademark lawyer would! I think this is actually a bit creative though. I don't know if it really erodes the major companies' reputations. Noone seems likely to think they're buying a Huawei or a Xiaomi here. It's almost like an homage.

(There is another little-known company called Huami Technology (安徽华米) who produced Xiaomi's FitBit-esque wrist band. I think that's a different Huami completely though.)

My Huami H3 came in a retail box with a faux-fabric finish. 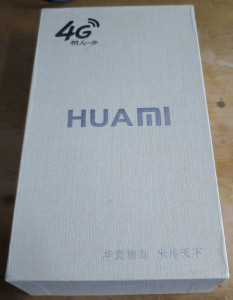 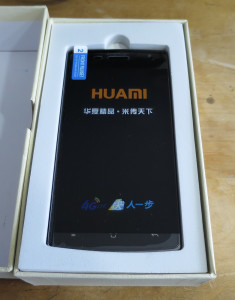 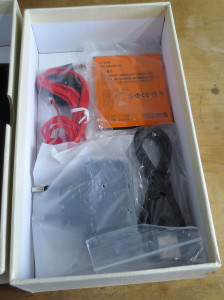 A lot of accessories for $34! A spare battery, headphones, and a USB charger. I won't be plugging the charger in, after watching Ken Shirriff's excellent USB charger teardown that demonstrated how noisy and dangerous cheap chargers can be.

The logo on the headphones looked kind of familiar:

Translated, I think the slogan means something like "Grand Chinese products", "Rice spreading to the four corners of the earth". "Rice" (alternatively, Millet) is the "mi" from Xiaomi, and is maybe also intended to evoke feelings of wholesomeness. China's home grown product on the world stage?

(Thanks to Mitch from Hackvana PCBs for helping translate the phrases. If you have an alternative translation or explanation then please leave a comment!)

Unlike most modern smartphones, the H3 has a removable back cover and battery. It comes with this quite nifty alternative back cover, that incorporates the "book cover" phone case style without adding to the thickness of the phone: 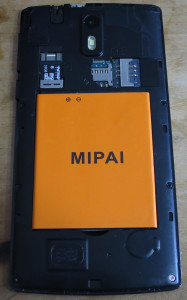 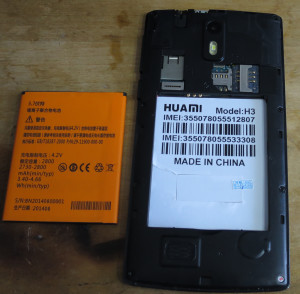 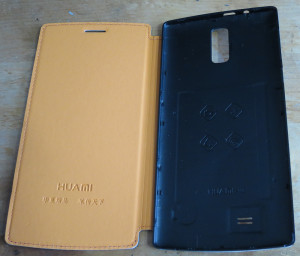 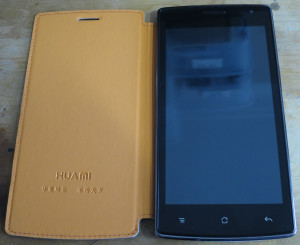 Here's a video of me putting the H3 through it's paces:

As a smartphone, the H3 is "almost OK". All the apps I downloaded from Google Play ran. The phone only locked up once - while I was playing a game. WiFi and Bluetooth worked. The onscreen keyboard was snappy. The screen is bright and clear. 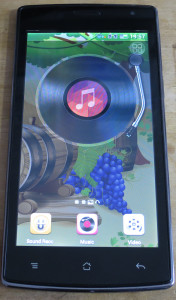 However, performance was pretty slow at times and it was clear the little H3 was low on RAM. The home screen would often have to reload from scratch after closing an app! Not much hope for multitasking. Touches on the touch screen occasionally didn't register.

Just after I got the H3 I thought I'd try it as my daily phone for a week while I was in New Zealand for a conference. After installing a few apps I went back to my Nexus 4. I could have used it for the week, but it would have been frustrating.

In the world of dodgy cell phones, specifications (like brand names) can be deceptive.

There's also some abnormalities on the "About" page in Settings, despite this nifty "8 core" CPU usage graph: 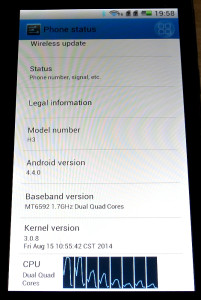 "Baseband version" is usually the version number of the baseband that drives the cellular modem. However "MT6592 1.7GHz Dual Quad Cores" is the brand name of a high-end smartphone System-on-Chip from Mediatek... Hmm...

Running a hardware profiler app, and poking around with adb shell (the Android debugger shell), confirms that the advertised specs are too good to be true: 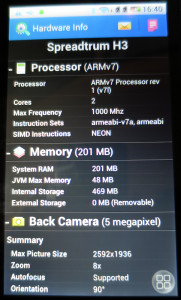 According to the /proc/cpuinfo output, the processor is a "Spreadtrum SC6825C" 1GHz dual core system-on-chip with integrated 2G.

Spreadtrum are a competitor to Mediatek in the low cost system-on-a-chip market. Last year they announced a partnership with Mozilla to produce $25US FirefoxOS smartphones using the SC6821 chipset - this chip's single core sibling.

"8 cores" was a con job. The About page was modded and a custom visualisation added to suggest a much faster processor with more cores. Sneaky!

More amazing is that the H3 only has 200MB of RAM! According to Google's compatibility PDF, Android 4.4 requires 340MB of available RAM. 200MB is even less than the Android 2.x era!

I'm amazed Android 4 is even halfway usable with such meagre RAM, given how terrible recent cheap smartphones with 512MB of RAM are! The Spreadtrum/Huami engineers could teach mainstream phone companies something here, I think.

One trick to help the RAM situation, the H3 is using 'zram' - compressing RAM internally to make a fake "swap" space! 90% of the system's RAM, a massive 180MB, is allocated this way.

This is another "I can't believe this works at all" situation!

Also sneaky is the storage situation. The Settings shows there is 4GB of internal space.

In reality the phone has about 1.2GB of total internal storage, and 469MB of this is usable for apps and storage (/data). It breaks down like this:

This lack of storage doesn't matter as much as you'd think, because there's a MicroSD card slot. This works nicely, and apps install to SD by default.

Having a 328MB /system partition for the OS is pretty tiny. On my Nexus 4 this partition is over 800MB, and nearly full. I think more hacky engineering feats have been done to shrink that down!

The last sneaky factor in the phone specs is Android 4.4 "Kit Kat", which was released in October 2013. The number 4.4 is displayed in many other places, even in the system profiler output. 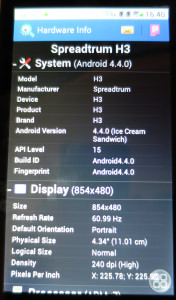 So the H3 is really running Ice Cream Sandwich, but the build strings have all been changed to say Kit Kat. 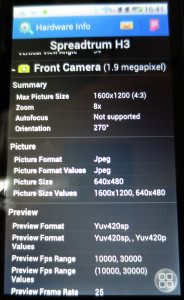 The cameras are quite reasonable. 5MP on the back, 2MP on the front. The photos they take aren't great, but they're better than any VGA-resolution feature phone!

How much of a scam?

I don't think the sellers in the Mingtong market meant to con me. When I was in the market stall, the man and woman behind the counter told me something several times that I think meant "this phone is not actually a MediaTek". Due to not speaking Chinese I can't be sure what they said!

My guess is that noone in the market intends to trick their customers completely over specs. After all, everything in that market is fake and everyone knows that! I think the fake specs meet other needs:

Some other unusual UI additions popped up: 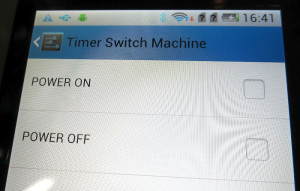 So, was it any good?

I think for $34US this is pretty remarkable. It suggests that the $25US smartphones that Mozilla are planning for FireFox OS may be the tip of an iceberg.

That said, I'm not about to start using a Huami H3 as my phone. It's a little bit too clunky, though it still compares favourably to other cheap smartphones that cost many times the price. Last year a friend bought a 60 Euro low-end Samsung smartphone with Android 4.1, and it feels significantly more laggy than the Huami.

If there was a way to load FireFox OS on it, things might be different as FireFox OS is designed for low end hardware. Sadly, there's no kernel or bootloader source code available for the H3 yet. I also I couldn't see an easy way to get root access. So loading other OSes is not possible, at least not yet.

Watch this space in a few days for Part 2 - tearing down the H3 and taking a look at the hardware inside...