I've assembled a network installer image to install Debian 7.0 "Wheezy" on the GK802 "Android TV" Mini PC. This is intended for people who want to run the GK802 headless or semi-headless, for server or robotics applications.

The GK802 is a 1GHz quad core ARM Cortex A9 computer that fits in your pocket. Built around the Freescale i.MX6 system-on-a-chip, it has 1Gb of RAM, two MMC (MicroSD) interfaces, a USB host interface, HDMI output and a LvTTL (3.3v) serial port and i^2^c bus available internally. I got mine for $69.99 on geekbuying.com, taking advantage of this coupon deal.

To do it in one step:

(Replace /dev/mmcblk0 with whatever device your SD card shows up on. See below for Windows/OS X.) 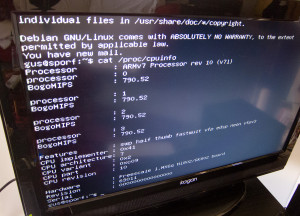 If you're on OS X or Windows then here are some Raspberry Pi oriented instructions for writing out SD images from these OSes. Most of these should work with the unzipped installer image, even Pi Filler or Pi Writer I think (despite the Pi-centric titles, SD cards are SD cards and bytes are bytes...)

Things That Do Work

By default the installer doesn't receive input on the serial port, only via HDMI. Same for any early boot input (ie if Debian detects a problem it will drop you to a root shell shown on the HDMI output.) To swap this interactive behaviour to the serial port, hold down the Recovery button at power on. You can also enter recovery mode via serial, press a key at the uboot autoboot prompt and and then type:

(To make this change permanent you can also edit the bootloader script, see the Bootloader section below.)

The installer provides a kernel package with this kernel and this config.

To change which kernel is booting, in /boot there are symlinks zImage & initrd pointing to the kernel used for normal booting, and zImage_recovery & initrd_recovery for recovery mode booting. Just change these to point to the new kernel.

If you want to build your own kernel package then you can use Debian's make-kpkg tool, something like this:

(See the gk802-debian-installer Makefile if you want to create a kernel package with a matching revision scheme to the supplied one.)

The installer provides a suitable /boot/ubootcmd script, with accompanying source in /boot/ubootcmd.src. That script looks for a zImage kernel and initrd in the first partition of MMC 1, then MMC 0, then USB devices 1-5.

Why distribute an installer?

Usually for these kind of devices people just provide a precanned OS image that boots directly up. I'm not a huge fan of this, it usually makes it hard to reproduce what the author did and inevitably there'll be some extra stuff installed or lying around on the filesystem from when they were cleaning it up post-release.

I am guilty of all of these sins myself, but this time I wanted to make it so someone else could reproduce the results, or easily tweak the build process. Hence, github repo. It's still hacky, but it's better than nothing.

Also, for my GK802 I wanted to run an encrypted rootfs on top of a software RAID-1 device using both MicroSD slots. You can probably set this up by hand with Debootstrap and lots of file editing, but Debian-Installer does it neatly and automatically just by following some menu prompts.

The Debian Desktop option is available to choose in the installer (takes a fair while to install.) It may even work out-of-the-box if your screen doesn't strike the kernel EDID bug and default to 640x480 (mine does.) However you'll only get the plain unaccelerated framebuffer driver fbdev, this is not a good option for a full desktop OS.

The Vivante GPU is disabled in the Kernel config, because this saves 192Mb of RAM. Also no proprietary Vivante X11 drivers are installed.

If you want a ready-to-go desktop OS with video acceleration, check out Jasbir's Ubuntu images for GK802.

NB: Freescale supplies binary xorg drivers that work with Ubuntu, which is what Jasbir uses. These may work with Wheezy but it's unlikely - Ubuntu 12.04 uses Xorg 1.11 and Ubuntu 12.10 uses 1.13, but Wheezy uses 1.12, so the ABIs are probably different. Please post your findings if you experiment with this. :)

The "source" build process that preprocesses a Debian netinst image to produce a GK802 installer is on github here if you want to do anything with it.