At Make, Hack, Void we've had a Rep Rap Pro Huxley 3d printer since the beginning of the year. 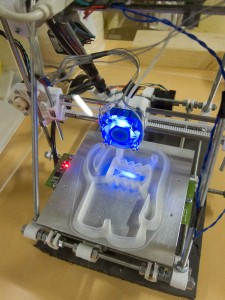 Unfortunately we've also struggled with a couple of long-standing problems. One of them is the PTFE "bowden tube" that encloses the filament between the extruder drive and the hot end. In the stock design, the tube is screwed into two threaded brass fittings at each end. Forcing the tube into the fitting makes a thread, it's kind of "self-tapping."

On some Huxleys this seems to hold firm, but ours popped out at the drive end repeatedly. Rethreading, glue, epoxy all failed. Ryan's clever stop-gap worked for a while but put a lot of load on the extruder drive motor: 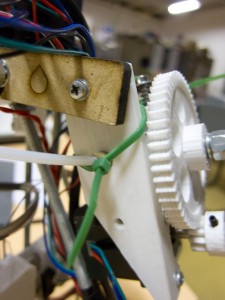 This is a modification of the Rep Rap Pro Huxley design to use push-to-fit pneumatic connectors instead of the brass fittings: 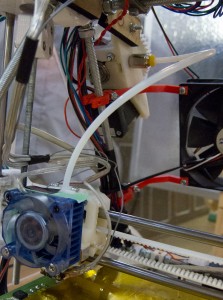 The design is inspired by DeuxVis' Bowden cable push-fit connectors, but DeuxVis' part doesn't fit the Rep Rap Pro variant of the Huxley.

While writing this post just now (isn't this always the way) I've found that eMaker is furnishing their Huxleys with pneumatic fittings that you can buy individually from them. They look like they're small enough to not require a redesigned hot end. I hope these weren't available when I started this project back in August, I searched a lot! If you're looking at options you may do well with those smaller fittings and less other changes, depending on what availability & your requirements are.

Nevertheless, here are the instructions if you want to go the Make, Hack, Void way:

When you're done, drop the M5 nut into the nut recess and then screw one of the two push-to-fit connectors into it: 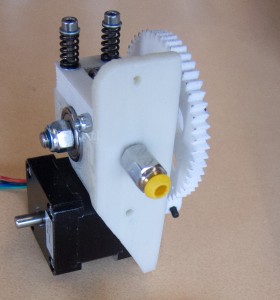 The hot end preparation varies quite a bit from the standard instructions, however. Here it is step by step:

When you screw the push-to-fit fitting into the aluminium heat block, it will foul on the blue heatsink. The 2mm copper (or aluminium) plate is a spacer to sit behind the heatsink.

You're looking to make a plate that matches this face from the heat block, 38x8mm with 2 3mm holes placed, centered 3mm from each end: 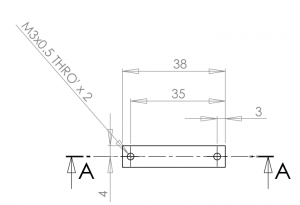 I used a piece of 2mm copper scrap with the drill press and hacksaw in the hackerspace:

As you can see it doesn't need to be too exact, there's quite a bit of room at each side. The most important thing is getting the hole spacing correct (centres should be 32mm apart.)

Of course, if you were machining the Huxley parts from scratch then you could just modify the whole "heatsink block" part to use 10mm bar stock instead of 8mm bar stock, and adjust the drill hole offsets accordingly.

Start by filing any irregularities on the printed nozzle mounting. In particular, the pathways for the two tall vertical screws need to be perfectly parallel so they can screw into the aluminium heater block as shown: 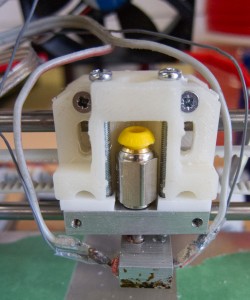 This is what it looks like fully assembled, note the parallel long vertical bolts.

Filing the printed material in-situ is a real pain, so if possible line all these parts up on the bench and make sure they'll fit.

Take care not to file too much material, though, because those bolt pathways have to hold the hot end tight against the mounting.

After removing the old nozzle mounting, start by screwing the new printed piece into the X carriage, using the same 4 self-tapper screws that held on the old piece: 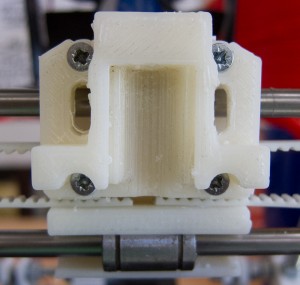 Next, remove the machined brass fitting from the aluminium heat block and screw in the push-to-fit connector: 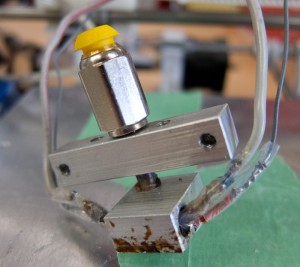 If your spacer is less than 2mm thick then it's a good idea to check now that the push-to-fit connector doesn't stick out any further than it. If it does, you'll need to tweak the angle of the nozzle so the connector ends up flatter when you tighten it down (when fully flat it only sits 1mm proud of the aluminium block.)

With a 2mm spacer there should be heaps of room regardless of angle, as you can see: 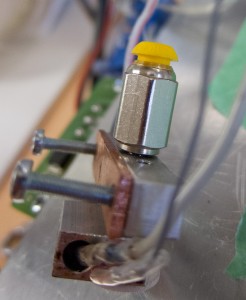 At this point, you'll need to take a sharp knife to the white PTFE spacer that sits on top of the heater block. Cut it into 3 pieces, cutting as close as you can to each of the two small holes while leaving them intact:

The middle piece is no longer needed, but the two end pieces are.

Now you can use the two long vertical bolts to screw in the push-to-fit connector against the printed nozzle mounting, sandwiching in the two ends of the white PTFE spacer:

At this point you'll want to hope that your pre-installation filing went well, or (like me) you'll be awkwardly filing the bolt passageways in-situ so they come out parallel.

Once the mounting bolts are tightened, you can push in the filament tube: 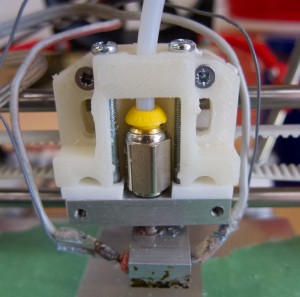 Finally, install the blue heatsink and spacer, using new M3 mounting bolts because the old ones aren't quite long enough: 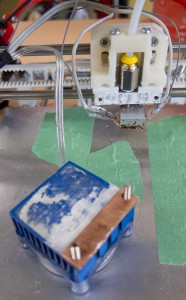 The whole thing should fit up snugly as shown: 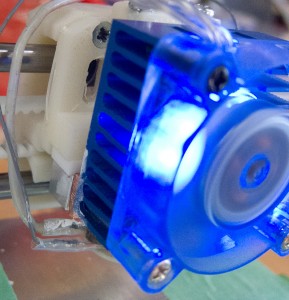 A note about cooling

When I installed the heatsink, I made a point of cleaning the old mounting tape off the mating surface and then applying a very thin layer of good quality thermal heatsink compound between each mating face. I was quite worried that the push-to-fit connector might get too warm if the heat block wasn't cooled efficiently enough.

Turns out I over-compensated and the newly assembly hot end was too effectively cooled! It couldn't reach 240° for printing ABS, it would reach equilibrium at about 230°. I had to take the heatsink back off and remove some of the thermal compound! An alternative might have been to turn the fan speed down so the heatsink stayed warmer.

Whatever you do, make sure the aluminium heat block isn't getting too hot. The push-to-fit connector is only rated to 100°C, and the surrounding ABS can also melt if the heat isn't bled off effectively.

Running the hot end at 240° for an extended time, I measured the ends of aluminium block at no more than 40°. Which I think is a very safe temperature, I can't see the middle of the block being significantly hotter than the ends.

The printer has done more than 5 hours of printing now, and I think this design is a success: 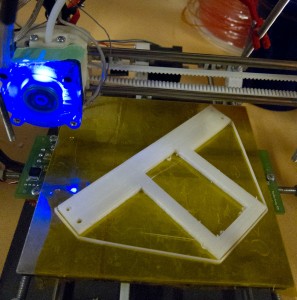 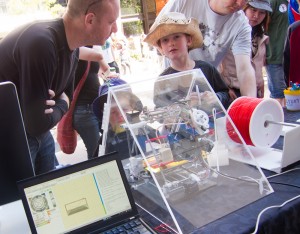 On display printing a business card holder at the Art, Not Apart festival

The OpenSCAD files are available on Thingiverse, but there is also a full fork of the Huxley design on github with the changes in it.

This wasn't my first attempt at upgrading the extruder:

The first thing I needed to do was redraw the two printed parts. The originals were made with Solidworks, which I'm sure is an excellent CAD program but it's not Free Software and costs a bit more than my hobby budget can bear!

Instead, I retraced the STLs from the Huxley repository into OpenSCAD, the results are available in a different branch on github.

The first redesign mounted the push-to-fit connector on top of the nozzle bracket: 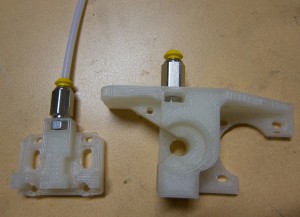 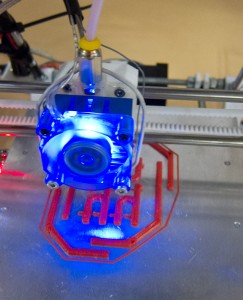 You can't see it in these photos, but the original redesign needed a lot of filing & drilling before it actually matched the Huxley parts. All mistakes in my understanding of the design. Thanks to Adam to MHV for helping me with this part of the install, and getting the new extruder on the printer.

However, once installed this version worked fine for over a week, with several prints.

The second design draft was a cleanup of the first, fixing dimensions to minimise drilling & filing and also beefing up the push-to-fit mount at the top of the nozzle mounting: 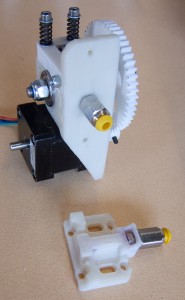 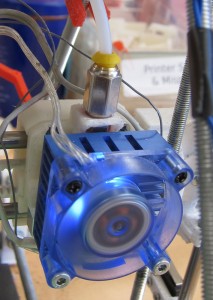 This redesign worked fine until I tried to print something that took up a large area of the 140x140mm bed. Turns out that the push-to-fit connectors, though sturdy when held statically, will eventually bend their way out if flexed back and forth. Having the X axis travel all the way back and forth, over and over, eventually worked it loose: 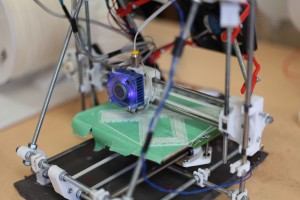 Hence the final redesign with the push-to-fit connector recessed low behind the heatsink, with a collar at the top to hold the tube straight and fast.

Hopefully this redesign is the last one for the extruder. The MHV Huxley is broken again(!) right now, although this time it's one of the Y Axis mounts and nothing to do with the bowden tube.

Hopefully someone will be able to repair that failure successfully without requiring a whole part redesign, though!