I'm calling this a "technical review" because I'm not going to spend much time talking about using Android on this device. The reason for that will become apparent. 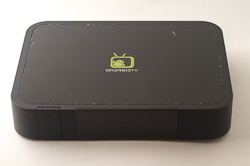 You can buy these from various online vendors (dealextreme, aliexpress, etc.) Also under other names - for instance it's sold here in Australia as the Kogan Agora TV.

The "original" product is the Flexiview FV-1, made by Mesada Technology, Shenzhen.

Bear in mind that like most of these "shanzhai-esque" products, what's advertised on the web page may be different to what you get. There are a few similar-looking products out there - I've seen ones with SoCs from Rockchip and Amlogic. Also, specs and build quality can vary widely depending on vendor.

The hardware is cheap & cheerful. The marks and scratches visible in the photos weren't me, it was like that out of the box. EDIT June 2012: Tony points out in the comments that there's a thin film covering the piano finish, and he's absolutely right. Here's a quick photo, the top-left corner is a reflection. 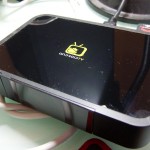 Nevertheless, things mostly work and the build quality seems OK. One thing I did notice is that the video output can be a bit picky on the stock firmware - only some of my monitors worked, and I saw reports of some TVs not working. I think the requirement may possibly be supporting a 720p YPbPr video mode.

The other cheap and nasty bit is the little plastic "door" on the front covering 2 USB ports. It's hard to open and close, and I doubt any serious user would leave it there for long.

If you've never heard of "Android TV", that's because it doesn't really exist. There is a thing called "Google TV", but those products are relatively rare and closed-source and not available for $130.

"Android TV" really means "the plain vanilla phone operating system, with a remote control that emulates a mouse & keyboard which you then use to control an interface designed for touch-screens."

Sound nearly unusable? It is. A touchscreen interface is not a PC, which is in turn not a remote control interface. It's horrid.

The device works pretty well with a wireless keyboard and/or mouse. Which is fine, but you'd be just as well off buying a tablet with an HDMI port (for less money) or even just hooking up an old PC.

I didn't use Android much - I can confirm the browser works quite nicely. However, looking around the internet I saw a lot of reports of patchy video playback. Which is disappointing.

As usual for these devices, the vendor offers no after-sales support. Firmware updates are scattered around the net in strange places (others are hidden in various giant forum threads!)

So why did you buy two?

I bought these because I have a weakness for cheap low-power ARM hardware. I wanted to see how easy it was to port GNU/Linux, and maybe have a stab at porting XBMC. I'll put details about running GNU/Linux in a follow-up blog post.

Of course, to get hacking, you need to open the cover: 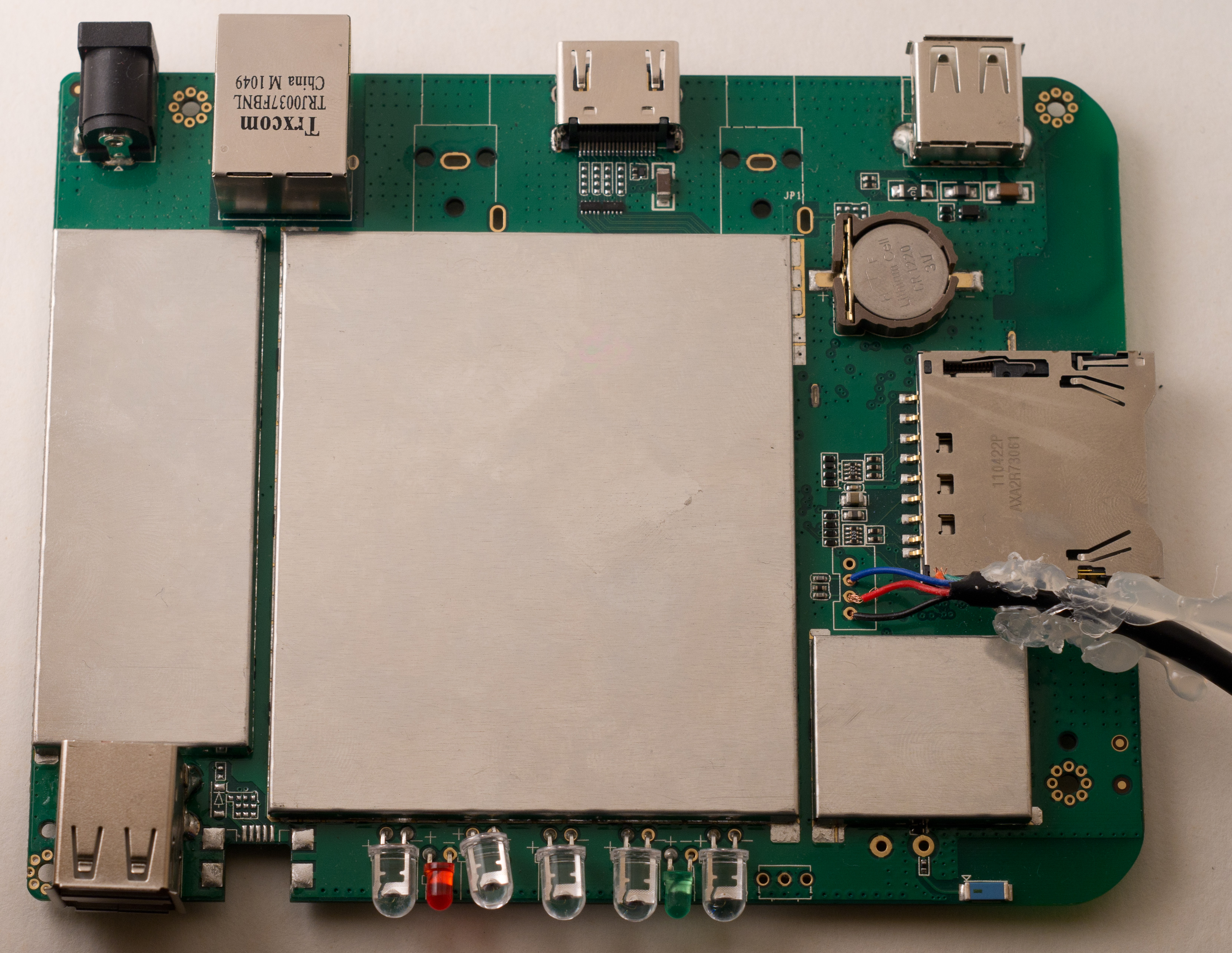 Here's the board. The sloppily attached cable is the serial console. Thanks to eDIY NZ for posting the serial cable pinout online - it's a 3.3v lvTTL port, 115200bps. Looking top-to-bottom in this photo the pinout is 3.3v/TX/RX/GND. The hot glue was originally for strain relief!

For a serial link, I used my favourite source - a mobile phone USB to Serial cable that I got for $2 at an op shop (("thrift store")).

Also note the unpopulated USB port, some unpopulated front & rear connectors, and the button cell battery. The battery surprised me, I wonder why they didn't drop it to save on BoM (bill-of-materials) cost.

The large clear LEDs at the front are the IR LED beacon for the "wiimote-style" remote. The red LED is for power (amusingly, HDMI standby power can come from the monitor and light it even when the unit is off!) The green LED is connected to a GPIO.

Pry off the RF shielding and things are a bit more interesting. "Open in New Tab" on the images if you want to be able to read chip names. 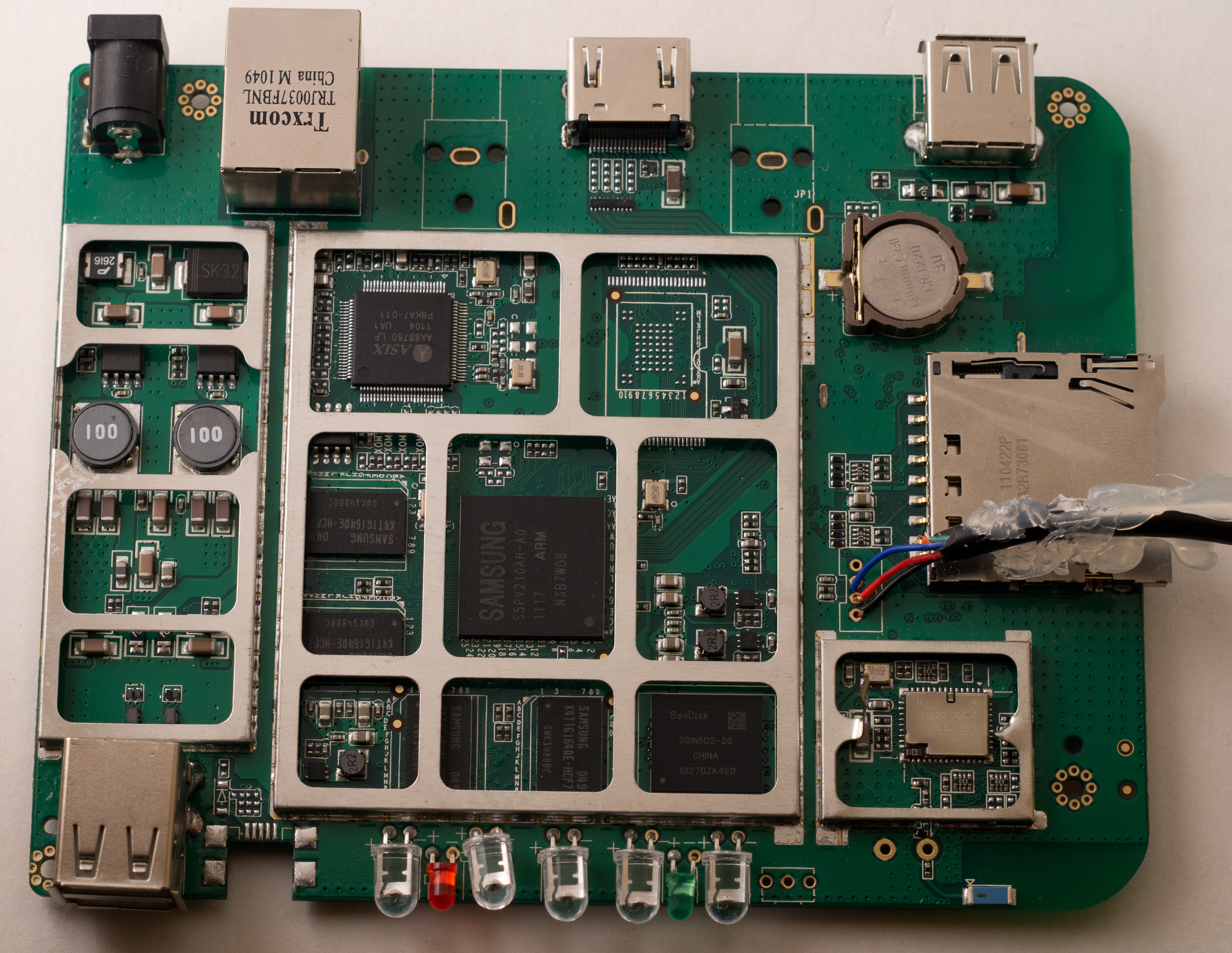 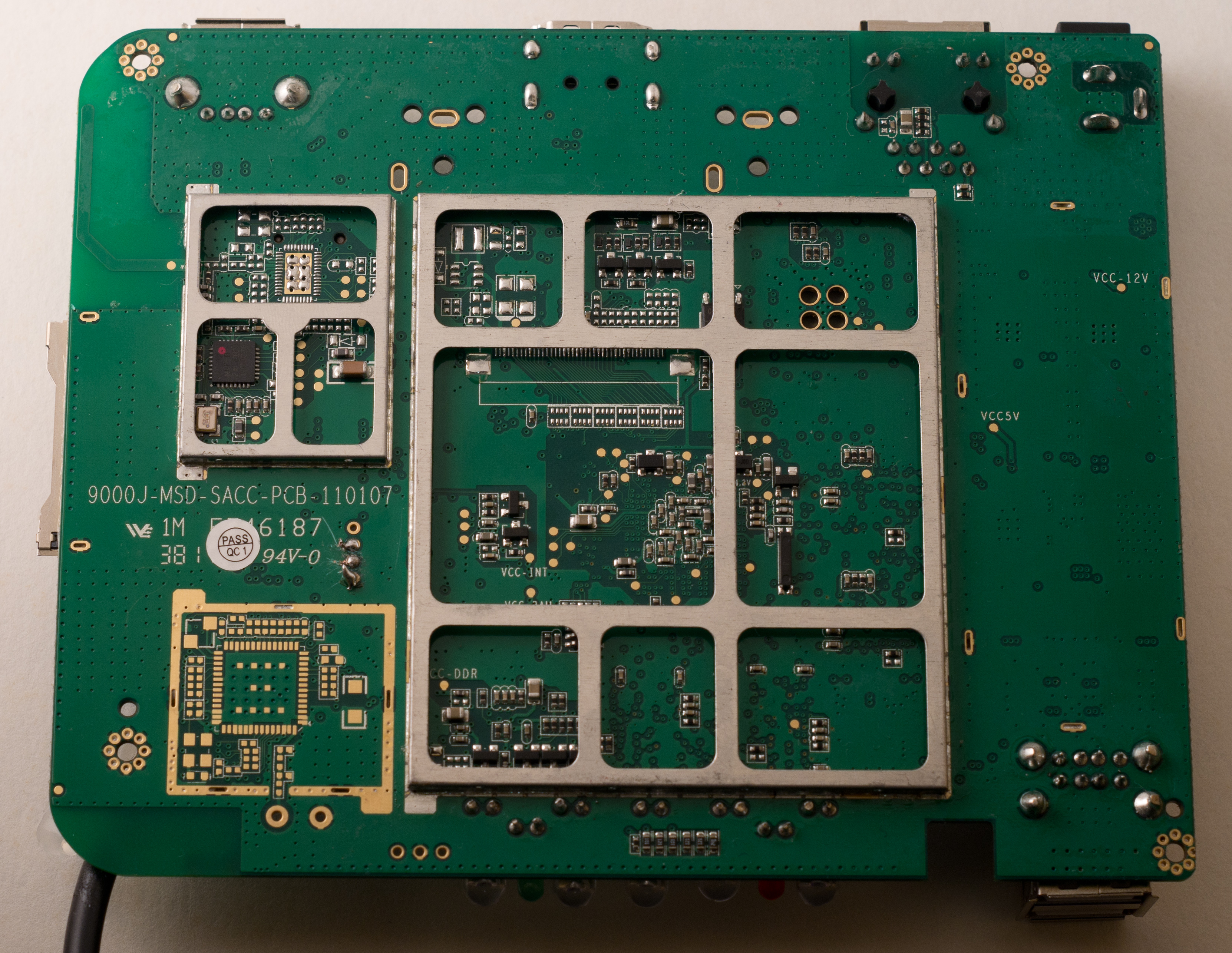 On the underside, the most interesting thing is the Nordic Semiconductor nRF24LE1 2.4Ghz digital transceiver under the left-hand shield. This is connected via SPI and talks to a similar model IC in the remote control. I haven't looked at the protocol yet.

Under the main cover, it looks like there is an unpopulated LCD interface. Plus something else totally unpopulated on the bottom left. Given that Mesada also make many GPS devices, maybe there is a car GPS that uses this board?

As I've written before, GPL compliance for these kinds of products is generally poor. The FV-1 is no exception, as far as I know it is impossible to get source for the exact Linux kernel running on the device.

It is possible that distributors outside China, like Kogan here in Australia or "Flexiview NZ", are able to supply GPL source code - they have more reasons to act ethically and not break the license, and potentially severe consequences if they are distributing a violating product. I don't have any more information either way.

In the meantime, I bought this device anyhow because Samsung are generally proactive with open source development, and S5PV210 SoC support is part of the mainline Linux kernel. In practice, it was much more work than I anticipated to get a kernel building from source that runs on the device.

The device comes with a 2.6.32 Android kernel loaded. Here's a dump of the boot messages and dmesg, plus some interactions from the Android side - /proc entries, mount points, etc.

Among the custom additions in this kernel are:
* The TI vendor WL1271 driver (open source, but different to the Linux kernel one)
* The PowerVR SGX540 3D accelerator drivers
* In-kernel driver (it seems) for the RF remote, via SPI.

Also of note is that Android isn't using a Framebuffer device for the HDMI output (the framebuffer in that kernel is for the LCD only.) Android must be using an earlier revision of the v4l2-based s5p-tv interface.

As I said, it seems like no source exists for the 2.6.32 "vendorkernel" that ships on the device.

I now have a 3.2rc kernel that boots and can run a normal GNU/Linux, with xorg over framebuffer, available here on github. Not everything works yet, though. Some of the fixes are a bit hacky and need to be cleaned up. Hopefully, soon some of the support can go upstream to the mainline kernel. More on this kernel in a follow-up post.

After much searching, I found two other helpful S5PV210/S5PC110 kernel sources (not that I ever successfully booted them on the FV-1.)

A Chinese development board called the RealARM Realv210. This looks to be very similar to Samsung's SMDKV210 development board. I think the FV-1's reference board was either the Realv210 or the SMDKV210.

RealARM are distributing a number of useful resources, including a Linux 2.6.32 kernel for the Realv210 board. This reference has been very helpful in getting 3.2 up and running.

The last vendor surprise is the bootloader. "Mesada mboot" is the strangest embedded bootloader I've ever seen - among its features it appears to be able to both read and format EXT3 filesystems! Unfortunately, mboot is also closed source and no documentation is available.

The good news is I've managed to reverse engineer enough of the format to "unpack" and "repack" mesada's .osk firmware update files. This allows the flashing of a new kernel, or new system partitions, or even a new bootloader. The project is called mboot-tools and is up on github. There are some usage instructions in the README there, and lots of comments in the header file.

It should also be possible to use mboot_unpack & mboot_pack to make "custom Android ROMs" or possibly even as a first step to porting a newer version of Android (after all the hardware is very similar to Galaxy/Nexus S, which can run ICS.)

I'll put a post up soon explaining how to boot Debian on the FV-1, explaining what currently works and what doesn't.