I've been investigating Telstra's T-Hub "home phone of the future". The T-Hub is built with open source software, but Telstra do not seem to be honouring any of their legal copyright or licensing obligations.

Update 2, 9 Feb: Telstra have posted information about how to request T-Hub source code. I will post more details when my disc gets here.

Update 1: A response to Telstra's PR statement about T-Hub & T-Box.

(For the non-Aussies: Telstra is Australia's largest telecommunications company, and is part government owned.) 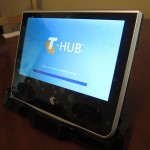 I investigated the T-Hub and found it is built on a variety of open source software, including GPL licensed software like Linux and busybox. However, Telstra are not mentioning this anywhere and are not distributing source code, or notices to obtain source code.

By doing this, Telstra are violating the licenses and also robbing the authors of their rightful attribution. They appear to be regarding open source as a free-for-all that they can exploit without giving back even the small amount required legally by the various license terms.

However, I believe that Telstra can easily take steps to comply with these licenses.

Telstra have a range of other Linux-based products, including the T-Box and a soon-to-be-released "T-Tab" Android tablet. To the best of my knowledge the T-Box is not GPL compliant either, which gives me little hope for the upcoming T-Tab.

T-Hub is Telstra's "home phone of the future". It's essentially a tablet-like device (think Chumby with less functionality) loosely integrated with a cordless land-line telephone. The OEM product is from Sagem, although as far as I know Telstra is the only vendor world-wide.

The GNU General Public License is an open source "copyleft" license. Vendors are encouraged to freely distribute products built with GPL software, provided that they acknowledge the license and also provide access to the source code (modified or not) for the GPL licensed or derived portions.

A while ago I learned that the T-Hub runs Linux, which is subject to GPL.

Best quote so far, when I was transferred to tech support: "Look mate, noone calls up Microsoft and asks for their source code..." Um, sure.

Frustrated, I bought an "as-new" T-Hub on ebay. First, I scoured the documentation for any mention of the software license(s):

Next, I found the URL where the device downloads its firmware. The current firmware can be downloaded directly here. The file is a JFFS2 filesystem image, which can be mounted via mtdram as described here (EDIT: you can skip the jffs2dump step if you're on a little-endian machine like a PC.)

By browsing the filesystem of the device, I can see a range of GPL or LGPL licensed software contained within. Here is a (possibly incomplete) list. The following components are GPLv2 licensed:

The device appears to be built around a Freescale i.MX31 SoC, which means that it probably also contains a GPL licensed bootloader (u-boot or RedBoot.) I haven't taken any steps to verify the bootloader, though.

The following included open source software is not GPL licensed but has a license that requires acknowledgement that it is included in the product. These notices do not appear to be included, either.

What should Telstra do?

GPL compliance is not that hard. GPL-Violations provides an excellent (and simple) vendor FAQ explaining a vendor's obligations under GPL.

Telstra should review their use of open source in all their products, and amend their ways so they are legally compliant.

Aside from the time this will take, I don't see how GPL compliance could negatively impact the T-Hub product in any way. In fact, it may even provide a new market by allowing intrepid users to load different software onto the T-Hub. Of course, this is beside the point - the license terms are clear, and by choosing to use these software products Telstra must commit to honouring their license agreements.

There are a few kneejerk responses that always seem to appear in these cases, so I'm going to address them in advance:

"The source code wasn't modified, so there was no need to comply..."

This is a misconception about GPL. The source code doesn't need to be modified as a prerequisite for compliance.

EDIT 8/11: Glen points out in the comments that clause 3c only applies to non-commercial distribution, so it seems Telstra can't copy someone else's notice - they'd need to provide their own offer for source (3b) or put the source code in the box somehow (3a).

"Sagem made the device, not Telstra. They are responsible for compliance."

It is true that Sagem made the device. However, Telstra are the legal entity who are distributing (ie selling) it. The customer's relationship is with Telstra, not Sagem. Whatever private arrangement exists between Telstra & Sagem is not our business.

Of course, in practice, it is Sagem who will probably be responsible for providing source code and documentation in order to allow Telstra to comply. At the moment I think there are two possibilities: one is that Sagem provided enough information to ensure their compliance, and Telstra ignored that information. The second is that Sagem did not provide enough information, and are themselves in violation of the license. However, as I said before, this is Telstra's business with Sagem, not my business or the business of any of Telstra's customers.

This one always baffles me. Via GPL/LGPL a company can get access to a complete world-class operating system with libraries for almost any conceivable use. They get this at no monetary cost, without needing to negotiate any license agreements or pay a cent to anyone. Better yet, all of the software comes under a single license so the legal department only needs to read and understand one or two documents. The company is then welcome, even encouraged, to build end-user software on top of this OS & libraries, bundle it all into their products and sell it at a profit.

The only thing a company is asked to do is acknowledge the open source components, and make source available. That's the sole cost to a vendor like Telstra, for an entire software ecosystem. I believe the GPL can make no claim on any of Telstra's original contributions to the T-Hub, such as the custom HTML UI, which are not derivative works of any open source software. None of that source needs to be released, unless Telstra wants to release it. There's no risk that Telstra will somehow lose any competitive advantage they have in this product, via open source.

Yet it seems to be all too hard. Why is that?

If you want to buy something like a T-Hub ("kitchenputer"), but want a product that respects copyright law, then I recommend checking out Chumby for starters. Chumby Industries are a terrific company when it comes to open source. Internode sell chumbys in Australia (no Chumby One yet, though. :(.)

What am I doing next?

I'm going to notify as many rights-holders as I can find for the software mentioned above, and encourage them to formally contact Telstra.

I'm not sure what I'm going to do personally with my ebay T-Hub. I'm not a Telstra customer, so it's more or less useless in its current form. So far I haven't found any way to load custom firmware, without spoofing Telstra's update web server (although I haven't taken mine apart to look for a serial console.)

I thought it might make a good Android tablet, but it has a resistive touch screen and it also probably doesn't have enough physical buttons for a good Android user experience. Plus for the same money I could buy a OMAP3-based Android tablet with a Cortex A8 in it (newer than the ARM11 CPU in the T-Hub.)

So... it's probably going back on ebay. Unless anyone wants to buy a nearly-new T-Hub? I can't guarantee the sale will comply with any licenses, though. :D.

Thoughts on “Telstra violating GPL in their T-Hub product”