Android 2.2 on dirt cheap WM8505 tablets. I said it may not be possible. Since then, I've spent hours and hours trying to reverse-engineer the custom calls that the WM8505 Android port uses to set up the correct graphics modes. I still can't replicate their process successfully.

However, on Sunday I had what my friend Adam has called "an a-ha moment" (( I called it a doh! moment )). Android's own porting guide says the graphics mode has to be RGB565 with double-buffering (aka page-flipping), but apparently this is not strictly true.

Within a couple of hours, I had a Froyo home screen up on my M001: 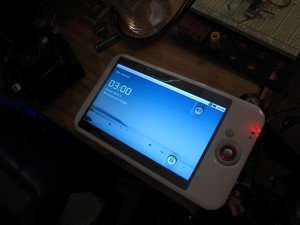 Now, a few busy evenings later, I can offer a hacky alpha for people to check out, and hopefully build upon. However, this is not the same as "the Eken M001 now supports Android 2.2".

Get to the Android already!

OK, here it is. This build is configured to boot entirely from the SD card, to minimise the chances of bricking a tablet and to make it easy for people to check it out. You should be able to run this without any impact on the OS installed in the tablet.

This image is a dodgy hack, pre-release quality, and totally unsupported, btw. Do not expect very much.

(where sdX is your SD card device. You'll need to unmount the SD card, first.)

If you're unfortunate enough to be stuck on Windows, you can download a zip file with the image (M001 or M003). First, unzip the image. Then, the Slatedroid forums have instructions on how to flash the Debian SD card image from Windows. If that doesn't work, you can try these instructions. The Debian image is the same format as the Froyo image, so the same steps should apply.

If you have a smaller SD card, or you just want to make your own, then I also uploaded tarballs containing the FAT and ext2 partitions for each tablet. You can unpack these onto any SD card, with the following partition & formatting scheme: w 1. FAT16 (for script/ directory) 2. linux-swap (optional) 3. ext2 (for root filesystem)

(NB: The partitioning scheme has changed since the first set of posted images.)

The first boot from the SD card will take a few minutes longer than usual, because the Dalvik VM is generating its cache. I think mine takes around 5 minutes the first time.

The following things are untested and probably don't work:

However I expect all those things should be fairly easy to implement, except for smooth video playback.

Installing to the flash in the tablet

At the moment, this only supports booting from SD card. However, there's no reason why someone clever couldn't build an alternate version that installs to the tablet's internal flash - all the required pieces exist AFAIK.

All the scripts & patches I used are available on github. There should be enough there for a savvy person to fairly easily build this again from an AOSP release.

The kernel used is "my" copy of Wondermedia's kernel source release. Hopefully as Alexey's from-scratch kernel adds more features, it will eventually be able to run Android as well.

If you do build anything using this, please please please share source/instructions for what you improve. Every "secret" someone hoards away is a step away from making these devices properly usable.

This Froyo build comes unsupported (sorry), and I'm not likely to do a whole lot more on it. However, one thing I do intend to do is get it running on my Eken M003 (my M001 has serious hardware problems so I can't really use it as a tablet any more.)

However, I really hope that others will jump in, build on it, and make something good. Enjoy!