This post is about how I became a self-loathing iPhone owner, and decided to switch to a device that noone has ever described as "revolutionary", "amazing" or "magical". 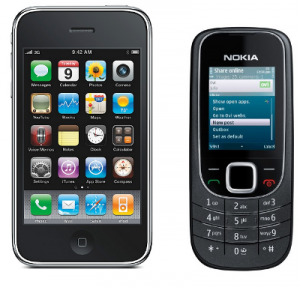 First, the obvious reasons. I've been increasingly uncomfortable with Apple's monoculture. I've never liked their closed approach to device ownership. Even though my two iPhones have been jailbroken, I've bought apps - contributing money to the App Store economy. I've also contributed to Apple's iPhone bottom line. All rewarding a business model that I don't agree with at all.

Pushing matters to a head, three months ago I replaced my Macbook Pro with a PC running Ubuntu. I discovered that iPhone ownership is a lot less seamless when you don't have OS X to coordinate everything. ((Please don't misread this post as either pro- or anti-Apple. I like Apple's products, I think the iPhone & OS X both offer a great user experience. I really don't like the things mentioned above.))

Given all this, and my general love of gadgets and technology, you would expect that I would choose an Android phone. One of the more open models. I thought very hard about picking up a Samsung Galaxy S (especially now Cyanogenmod supports it) or even a Nokia N900, the ultimate geek pocket gadget.

That isn't really it, though...

I don't like the person that the iPhone encourages me to be. I don't like reaching for it over and over, checking Twitter or scanning my email boxes with every idle moment. I don't like how quiet moments of reflection get replaced with boredom that there's nothing new on the Real Time Web. I don't like that most days I spend more than ten hours in front of a computer, but I still feel the need to carry one around in my pocket. I don't like taking my iPhone out during meetings or conversations. I don't like "the iphone effect".

These kind of phenomenons have been written about over, and over, and over. In pieces ironically intended for online consumption, a variation on the standard "moral panic" and "technology shock" opinion genres. Nevertheless, parts of the articles ring very true for me. My personal favourite writing is from the blog Tweetage Wasteland. Go read it (really, do!)

In fact, reading comments about a Tweetage Wasteland post on HN was when this really struck home to me: 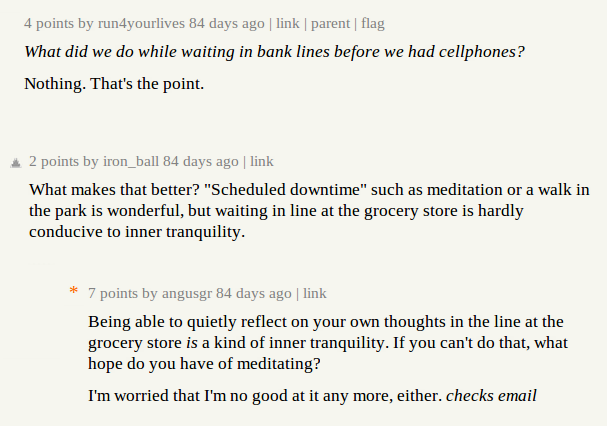 The underlying assumption is that idleness is necessarily wasteful, and why would anyone want it? Consequently, consuming information is a more fulfilling form of activity than just being inside your own head. I don't think I agree.

Since getting an iPhone I don't read books nearly as often as I used to. I don't sit and stare into space quietly, thinking about whatever happens to be on my mind. I don't pay as much attention to the world around me. I miss all those things.

Of course none of this is the iPhone's fault. Smartphones are just tools, plenty of people don't have this problem at all. If I had better self control then I'd just curb my use. In my case, I think the problem is smartphone ownership combined with N.A.D.D. (Nerd Attention Deficit Disorder.) An iPhone is like a "New Tab" browser menu, for your life.

Some observations about being back with a Classic Nokia after 2 years in iPhone land:

Things I Will Miss

There are some things that I expect to miss about having an iPhone:

I think so. Even though I no longer have a job that requires me to be available on-phone at weird hours (another plus for ditching the iPhone), mobile phones are embedded in my generation. My partner, friends, and colleagues would all be put out if I ditched it entirely. Besides, they're pretty useful devices to have.

I'm terming this an experiment because in a month I might decide that I'm an idiot, and I'll go buy a Galaxy S. Expect a follow up blog post if that's the case. My partner certainly looked at me in total disbelief when I told her this plan. "Just get the Android one, you'll be happier that way." She may well be right.