This teardown shows the V006 revision of the board, a quick serial port install, and includes some console/dmesg output. The main difference between V005 and V006/V007 board revisions seems to be relocating the USB WiFi dongle to a better position.

EDIT: It took me a while to post this article, and Slatedroid is down this past week. So links to there will be broken (hopefully not for good.)

This isn't the first teardown of the Eken M001, the first one was the "Aimless Teardown" and there is also a disassembly howto video by another community member.

I've had lots of hardware problems with my Eken since I took it apart. They may have been there before, but maybe not. YMMV, but be careful and remember you may not still have a warranty after the device has been opened, and especially after it's been modified.

Specifically, I have two problems. There is a cold solder joint in one corner of the board (I'm currently warming it up before it will boot at all.) Also I get occasional failure of the LCD (totally black) on reassembly, which requires me to press on the front of the unit until it clicks back on.

LCD and touchscreen ribbon connectors on the left side.

Here's some shots of the CPU daughterboard: 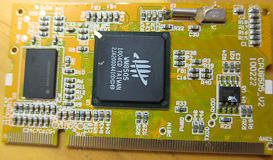 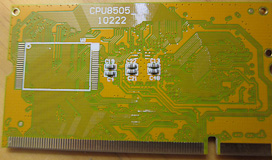 I didn't take any photos of it before I soldered on my serial port, but here it is after: The only other interesting thing I saw on the back of the board was the 2Gb NAND flash: 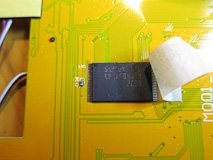 Once you have the serial port connected, you can grab some log data easily (and you also get a root shell once startup completes.)

EDIT: As of firmware release 1.7.4, no more automatic root shell on serial console. It's still a boot console, but for root you need to log in... Poor show, Eken.

I meant to capture and post some of the 'logcat' Android log output as well, from standard startup, but it doesn't look like I kept any.